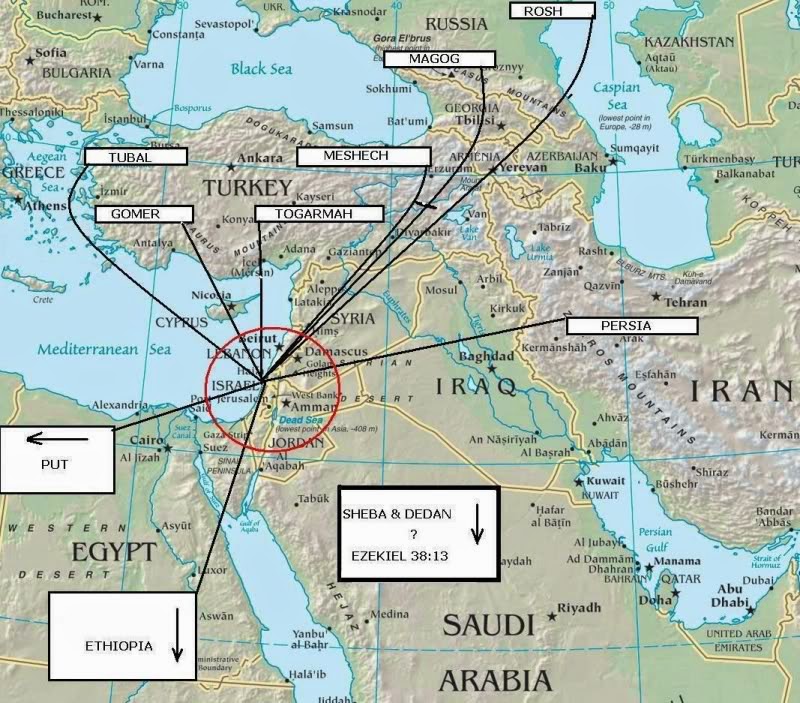 Sometimes the news speaks for itself. Ezekiel chapters 38 and 39 contain the prophecy of a war of involving several countries coming against Israel. The names used for the countries involved are the subject of controversy. Some of the countries such as Persia are well known. But other countries such as Magog are not known. There are a few references in ancient texts that give a general location, but it is difficult to directly relate these names to a modern country. Above is a map of some general locations.

So when Turkey forms a military alliance with countries in the Caucasus, we who watch the news from a prophetic standpoint pay attention.


Son of man, set thy face against Gog, the land of Magog, the chief prince of Meshech and Tubal, and prophesy against him, And say, Thus saith the Lord God; Behold, I am against thee, O Gog, the chief prince of Meshech and Tubal: And I will turn thee back, and put hooks into thy jaws, and I will bring thee forth, and all thine army, horses and horsemen, all of them clothed with all sorts of armour, even a great company with bucklers and shields, all of them handling swords: Persia, Ethiopia, and Libya with them; all of them with shield and helmet: Gomer, and all his bands; the house of Togarmah of the north quarters, and all his bands: and many people with thee.

Georgian Defense Minister Irakli Alasania held the first trilateral meeting with his Azerbaijani and Turkish counterparts within the frames of NATO Ministerial in Brussels, on June 4.

The sides focused on planning and conducting joint trainings in the context of protection of region's strategic energy-transport infrastructure. The ministers also underlined that the deepening of the cooperation will be oriented on the protection of national security of Georgia, Azerbaijan and Turkey.

"The first trilateral meeting was held between Turkey, Azerbaijan and Georgia," Alasania said after the meeting. "We have launched developing an initiative which we raised a year ago under the trilateral military cooperation."

Trilateral defense cooperation between Georgia, Azerbaijan, and Turkey was discussed in the Tbilisi summit of the presidents of these three countries on May 6.
Read More>

Please visit the Gog-Magog section of our forum for more information.