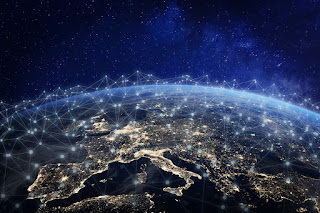 Jeff Bezos and Elon Musk are competing in another kind of space race, and FCC Chairman Ajit Pai is all for it.

Amazon has taken another step toward providing global broadband internet from space through its Project Kuiper. The company filed paperwork with the US government to launch the thousands of satellites needed for the plan.
Amazon submitted its application with the FCCfor Project Kuiper on July 4.  The internet heavyweight asked the commission for permission to "launch and operate a non-geostationary satellite orbit system using Ka−band frequencies." Satellites will orbit 366 to 391 miles above Earth.
"Submitting to the FCC is the first step – next, the FCC will thoroughly review our application and we look forward to working with them throughout this process," an Amazon spokesperson said in an email Monday.
Amazon will use 3,236 low Earth orbit satellites to provide broadband internet globally. "The Kuiper System will deliver satellite broadband communications services to tens of millions of unserved and underserved consumers and businesses in the United States and around the globe," the company said in the filing.
Meanwhile, Starlink is the SpaceX plan to provide broadband access across the world from space, and the company launched its first batch of satellites back in May. Billionaire Richard Branson started this race when his company OneWeblaunched satellites for his own high-speed internet space project back in February.
On Tuesday, FCC Chairman Ajit Pai addressed the private sector push for small satellites and his enthusiasm for it.
"We now have in our sights new competition in the broadband marketplace and new opportunities for rural Americans who lack access to high-speed Internet access," Pai said in remarks prepared for a talk at the US Chamber of Commerce. "That's why the FCC under my leadership has moved quickly to give a green light to satellite entrepreneurs like OneWeb, SpaceX, and O3b and is considering other applications from entrants like Amazon and Boeing."
Pai also noted that on Tuesday he presented his FCC colleagues a draft order to make it easier and cheaper to license small satellites.